Jahoo is famous for its unparalleled primate and wildlife watching opportunities.
Six primate species have been recorded and visitors have the unique opportunity of spotting both the endangered southern yellow-cheeked crested gibbon and the critically endangered black-shanked douc langur. Keo Seima Wildlife Sanctuary (KSWS) harbours globally important populations of both species.

KSWS is a vital wildlife hotspot, a stronghold for 75 species listed as “Globally Threatened” by the International Union for Conservation of Nature (IUCN), including sun bear and Asian elephant, traces of these animals are frequently encountered. The forest is also home to stunning endemic forest-specialist birds such as the greater hornbill and bar-bellied pitta that attract birdwatchers across the globe.

However, KSWS and its wildlife are under increasing threat from hunting, wildlife trade, and forest clearance and fragmentation driven by illegal logging and land grabbing. Community-ecotourism such as Jahoo, has proven to be a key conservation tool in mitigating these threats and protecting endangered species 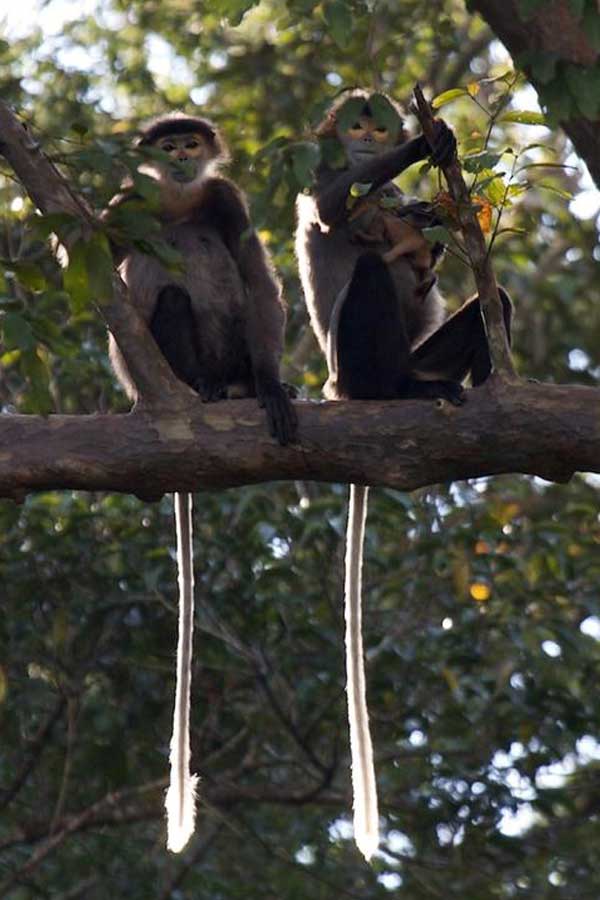 The team at Jahoo are indigenous Bunong people, a marginalised ethnic group with limited educational and livelihood opportunities. The forests are the ancestral home of the Bunong people, whose traditional livelihoods depend heavily on the sustainable use of natural resources.

With few prospects, youth often turn to illegal sources of income such as logging and hunting, fuelled by the regional demand for luxury wood and wild animals for consumption and traditional medicine.

Jahoo aims to contribute to breaking this cycle by providing alternative jobs dependent on continued conservation of endangered wildlife and forests.

Jahoo creates a space for the Bunong community to protect historical, cultural, and spiritual roots with nature in a contemporary context, whilst maintaining ancestral linkages with the environment and renewing their traditional stewardship role of the forest.
The local elected leadership, the Indigenous Community Committee (ICC), is a key partner, providing oversight of tourism operations and leadership on using the Gibbon Fund for social improvements and conservation action.

BOOK YOUR VISIT TO JAHOO TODAY